Disclaimer: Again, these experiences may not be universal when it comes to the experiences of women in Jiu-Jitsu. As a male, I still struggle in telling the stories of these women, for fear that I may not do them justice. If any mistakes are made in the telling of their experiences, it is my fault as a writer, and not the fault of the women who have shared their frustrations with me for these articles.

There are far fewer women in the sport of Brazilian Jiu-Jitsu than there are men. This might be for a variety of reasons ranging from social pressures, to not wanting to be in such close positions with strangers, to a simple lack of interest. However, the lack of women in BJJ causes a variety of problems in and of itself.

Often, women feel as though they are viewed as too frail, and are therefore treated over-cautiously during mat time. Other times, men in the class may fight them overly hard in order to save their pride from “losing to a girl”. A friend of mine told me how when she began as a child, she defeated a boy in a tournament. He cried and was upset because he lost to a girl. She was made to feel as though she had done something wrong by winning.

That’s a tame example. Another women I spoke with in preparation for this article explained that she had ribs cracked by a larger male with ego issues. Despite all of the talk of leaving our egos at the door, many women have explained to me that they feel like men struggle in leaving their ego behind when it comes to rolling with them. Women want to be treated as equals, not as either a fragile object, or a final opponent in ADCC.

Stemming from this, some have explained to me that they feel as though they are only allowed to be paired with other women, regardless of skill difference between them. This is partially because of how they may be treated during rolls, and partially because there are only so many females in the sport. The lower number of women in the sport creates an interesting dynamic within a gym.

It makes it more difficult for women to properly train for a competition, due to the lack of female body-types to roll with. Competitions themselves are also a rough experience for many women. A friend explained to me that she has only ever competed against someone in her own weight class once. Otherwise, they have all been far heavier.

This article could go on and on regarding other issues ranging from the lack of female rash-guards to being required to take an anti-rape course before being allowed to join regular classes, but that isn’t going to fix anything. What we need to begin to focus on is the correcting of what we know needs changing. We’ve highlighted a number of issues between this article and the last. They are all very real issues. We have a roadmap, so to speak. We know what needs to change. So let’s change it.

This sport needs more women. There is no secret about that. Much of what was mentioned today revolves around that very problem. So how do we get more women interested in Jiu-Jitsu?

As the last article addressed, we need to make our gyms a safe place for all genders. This article addressed a few issues, including pride. I happen to believe that men being overly-soft or overly-hard on women in their gym also makes for a very uncomfortable environment. 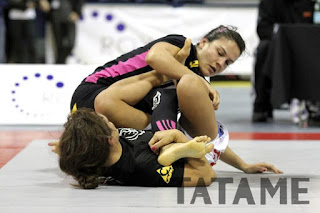 In order to make our gyms safe, and to attract more women to the sport, I personally feel that pride needs to go. Does everyone want to win? Yes. It’s human nature. We often claim that we don’t care if we do or don’t win. In a way, it’s true; but it’s also a lie. We may recognize that there is much to be gained from a loss, but we also continue in our attempts to win in open mats. If we never tried to win, we would cease to improve.

However, the inability to handle a loss properly creates issues. So to the men of the sport: quit worrying about “losing” to a woman, and quit thinking of her as a porcelain doll. Instead, treat one another as human beings, equals, partners. I believe that equality could go a long way in making the sport more accessible to women.

I’d like to wrap up this article with a quote from Avon Brazilian Jiu-Jitsu head coach, Justin Curtis, “Nobody cares if you win in practice…and honestly only a few people care of you win a tournament. Have fun, be humble, relax.”