London, United Kingdom, 11th March, 2018: Abu Dhabi Grand Slam® Jiu-Jitsu World Tour second day in London, saw some exceptional energetic fights among some of the worlds best Black belts in the finals. In the much-anticipated match between Paulo Miyao against Victor Otoniel in the Adults 69kg finals, Miyao won via choke after a tough fight and rising star Amal Amjahid of Belgium took the Gold in the Female Adult brown/black 55kg against Rose El Sharouni.

“We have come to an end of another glorious season of the Abu Dhabi Grand Slam. The UAE Jiu-Jitsu Federation has put a lot of hard work, the management team, competitors, sponsors and TV partners, I would like to thank everyone who has been involved in making this our best season yet. Thank you to His Highness Sheikh Mohammed bin Zayed Al Nahyan, Crown Prince of Abu Dhabi, for his vision and support for developing the sport of Jiu-Jitsu, and we will be back with Season 4 in July 2018 with a new addition to the tour, which we will announce soon.” Said Mr. Tareq Al Bahri, director of the Abu Dhabi Grand Slam® 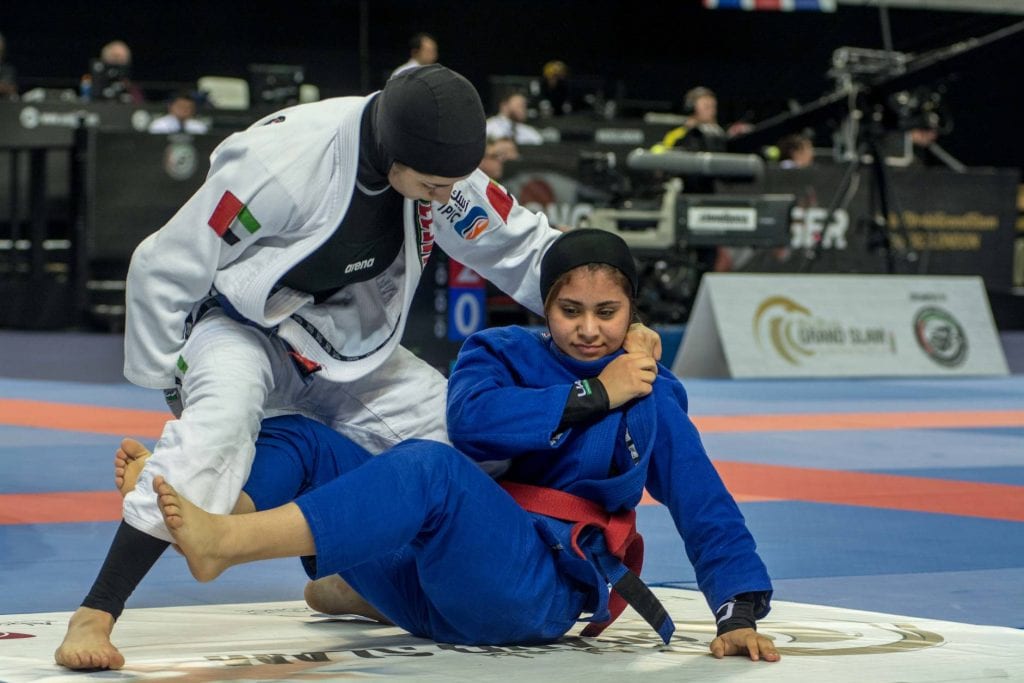 The Copper Box Arena in Queen Elizabeth Olympic Park was rocking with over 1300 energetic supporters in attendance, who at times, created an electric atmosphere in the venue to cheer on the superstar black belts.

Commenting on his win, Paulo Miyao said “Thank you to UAE Jiu-Jitsu Federation, all my supporters and the fans of jiu-jitsu in London for welcoming us here with open arms. It is great to win another Gold medal at the Grand Slam. I will see you all in Abu Dhabi for the World Pro Championship.”

Amal Amjahid, who is one the rising stars in women’s brown/black belt 55kg category, had an incredible performance, which brought the crowd to its feet, after she defeated Rose El Sharouni in the Adult 55kg brown/black belt finals.

Commenting on her win, Amal Amjahid said, “Firstly I would like to congratulate Rose for giving me a tough fight, she is really a top competitor and I enjoyed competing against her. Thank you to all the fans here in London, thanks to UAE Jiu-Jitsu Federation and my coach. I will take a few days off and then it’s straight back to the gym, as they say, jiu-jitsu is a lifestyle”

Overall it was a great tournament for the UAE players on both days, of all ages and belt categories, as they won a combined total of 67 medals: 23 Gold, 28 Silver and 16 Bronze

Emirati Jassim Mubarak of Al Jazira Jiu-Jitsu Club, who won the Gold in the purple belt Male Master 2 69kg category said “First of all I would like to thank God, the UAE Jiu-Jitsu Federation, my team mates and coaches at Al Jazira for their support. I am very grateful that I have the privilege to come and compete at the Grand Slam; I work very hard to represent my club and country. I always perform to do my best ability, I don’t think about winning gold or silver, I believe hard work will always pay off at the end and today my hard work paid off”

If you missed the event broadcast live, then it will be aired on delayed basis on the following TV partners in the coming weeks: FOX Sports in Asia, Fight Network in Canada, Europe and MENA regions, Astro in Malaysia, Starhub in Singapore, ABS-CBN Sports in Philippines, Orange TV in Indonesia, SCTV in Vietnam, Singtel in Singapore and Australia, Super Sport and Azam Sports in Africa, Fight Sports in the Caribbean, North America and Europe regions, Dubai Sports and Sharjah Sports in MENA.

The Abu Dhabi World Professional Jiu-Jitsu Championships 2018 will take place from 16 April to 29 April 2018 and it will be the 10th anniversary of the championship. Please visit HERE to register

56kg – On Saturday, Jose Carlos Lima once again finished the division on the top. In two matches, the Brazilian first beat João Kuraoka 4-2 in a tough match and then managed a 2-0 lead over Andrea Verdemare to take the gold medal home. It’s Jose’s fourth title in five Grand Slam events this season.

62kg – Hiago George worked hard on his top game to put pressure on Wanki Chae and eventually get a guard pass in place to go ahead 3-0 in the board to secure another gold medal in the season.

69kg – Paulo Miyao is the back to back champion. In the final he worked his way to Victor Otoniel’s back and got a choke in place to secure the gold medal.

77kg – Jaime Canuto had to work hard to secure the gold medal. After getting an armlock in place, which Marcos Paulo Costa defended for over three minutes, one advantage was the narrow lead that granted Canuto the title.

85kg – In a rematch of the division final at the Grand Slam in Abu Dhabi two months ago, this time Isaque Bahiense went in the match against Charles Negromonte decided to finish it quickly. That he did with a toehold that ended the match before the halfway mark and granted Bahiense a much deserved gold medal.

94kg – In a heated match, brave Paulo Pinto went full throttle against Jackson Sousa, who was able to score a 2-0 lead early. The match went on with a fierce standing game all the way to the end when Jackson was able to land on side control and let the clock run out to secure his gold medal.

110kg – In a hair-raising six minutes, Thiago Sá and Gerard Labinski traded sweeps to build a 4-4 tie with an advantage each one as well. It came to the referees to decide the winner and the trio unanimously pointed to Thiago.

49kg – In a single match on Saturday, Arantazazu Romero claimed the gold medal with a referee decision win over Serena Gabrielli.

55kg – Belgium’s Amal Amjahid imposed her game on Holland’s Rose El Sharouni to build a 15-0 lead and finally finish the match with a bow and arrow choke.

62kg – In a match that will stick in the crowd’s minds, Charlotte Von Baumgarten and Larissa Paes put on a show in the final. Larissa started out stronger and got a sweep and a guard pass to score 5 points. Charlotte fought hard to sweep back and in the end take the back to turn the board in her favor 6-5. Larissa was very brave not to tap to a bow and arrow choke, but could not avoid the defeat. In the end, a round of applauses for both warriors.

70kg – Ana Carol Vieira was the favorite and she confirmed her status. In a quick match, she pulled guard and smoothly worked out an armlock that left Thamara Ferreira no other option than tapping.

90kg – Fighting at home, Britain’s Arizona Brodie put a lot of pressure on Brazil’s Laila Carneiro to build a 9-0 lead in the scoreboard and secure the gold medal.

Two local branches of international teams dominated the competition with an UAE team also having an amazing performance. In the end, the results were:

Buchecha Signs With ONE Championship