Tyler Metcalf has autism, but that hasn’t stopped him from dominating the kids’ jiu-jitsu scene.

“Little Caio” as his teammates and coaches call him, has amassed 25 medals over the course of four years, and he is only 10 years old.

I had the opportunity to speak with Tyler’s father, Tim, a couple of weeks ago via Facebook private messenger.

Here is what he had to tell me about his son.

Jiu-Jitsu Times: First up, could you explain autism to some of our readers. Most of them have no doubt heard the word, but might be unfamiliar with what exactly it is.

Tim Metcalf: Yes, sure thing. Children on the spectrum have a very wide range of social interaction and impairment. Being on the spectrum one would have a hard time being able to pick up on non-verbal cues that most of us recognize on a daily basis. They may have limited speech or vocal abilities as well. These children do not have the ability to engage in social interaction like other children do as they cannot recognize facial expressions or may take things, in Tyler’s case, very literally. 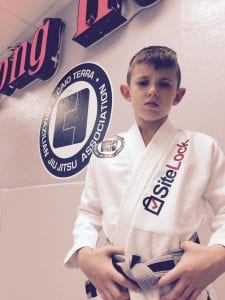 JJT: Not having the ability to engage in social interaction must make Brazilian jiu-jitsu difficult for him — with grappling, for instance. Does he have any issues with BJJ that kids without autism might not have?

TM: Yes, sometimes he can get lost in the shuffle as he can go into his own world and will “stim” from time to time. There have been many times where our professor would say to me “Sometimes I feel he is not paying any attention, but when it comes time to demonstrate the technique he just does it.”

JJT: And apparently he does it well! You said he has won a lot of medals. About how often does he compete and about how many medals has he won?

TM: Last year Tyler competed in nine tournaments and took home six gold medals: two silver and a bronze at the Kids Pans. In total he has well over 25 medals in the span of four years competing. Usually he competes between 8-10 times throughout the year both in state and out of state.

JJT: Wow! What got him into BJJ and how long has he been training?

TM: Originally he started training in Kyokushin karate at four. I wanted him to have a way to interact with other kids as he had a hard time making friends in pre-school as he used to play alone all day.

As for jiu-jitsu, it was something we ended up doing together as a family. I asked him if he wanted to give it a try and he said, “Okay, as long as you try it.” Four years later, here we are!

His personality “fit” for jiu-jitsu. Smaller framed, more than happy to react to his opponents than imposing his will on them. That’s what nudged us in the direction of jiu-jitsu. 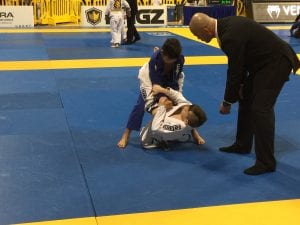 JJT: So he enjoys it? Or is it something you have to drag him to every day?

TM: Oh most definitely…our professor once said prior to the start of a tournament, “Tyler loves jiu-jitsu. He would do it 10 hours a day if you let him.”

He absolutely loves it.

JJT: That’s awesome! Does he have any BJJ heroes — e.g., Garry Tonon, Andre Galvao, etc. Anyone he wants to grow up to be like (outside or inside of the BJJ community)?

TM: Yes. He loves the Terra brothers, Caio and Kim. He had the chance to roll with one of them (Caio) at a seminar and was talking about it for days.

JJT: You said earlier that you wanted to inspire other children with this story. What would you tell parents of children with disabilities (either physical or mental) about getting involved in BJJ?

TM: The greatest thing about BJJ is the community.

Tyler has found a place to be himself and has friends that know him in a way you can’t get from other sports.

There is a ton of support that we have from our gym and it has allowed parents to network with others who’s children might have special needs.

BJJ was able to give a very anxious child a voice and confidence to speak up in class at school and ask questions when he was afraid before on how he would be perceived by others.

You check out a video Tyler Metcalf below:

This article has been edited slightly for clarity.
All pictures used with permission of Tim Metcalf.

Robert Drysdale: “What You Do With Your Free Time Speaks Volumes To Who You Are As A Person”