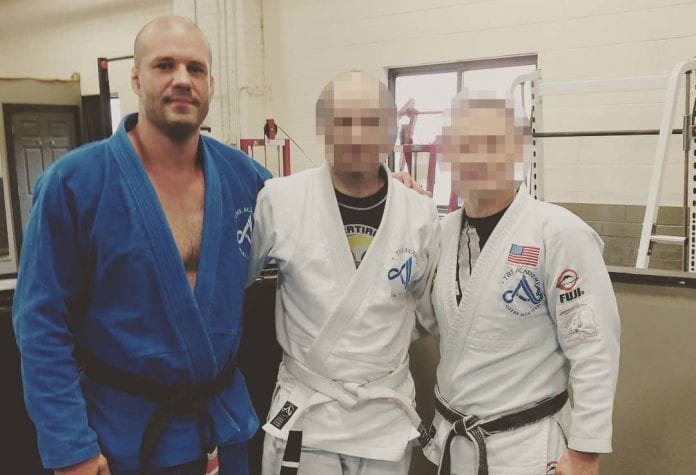 MMA fighter and grappling coach Nathan Homme has a black belt in Brazilian Jiu-Jitsu, but seems to have felt his years of combat training wouldn’t be sufficient to kidnap his ex-wife. The head instructor of The Academy Eau Claire was arrested in Wisconsin with syringes, handcuffs, maps, latex gloves, duct tape, shotgun receipts, and what police believe to be a handwritten plan for kidnapping and murdering his ex-wife.

Homme, 39, allegedly broke into his ex’s home while wearing a mask on March 13, according to TwinCities.com. The break-in caused police to search Homme’s property, where they found $5000 in hundred-dollar bills, as well as a black case with vials of medication, inside his Kia Optima, according to the police report. The “kidnapping kit” comprised of the handcuffs, gloves, duct tape, and maps were found inside his home, along with the two shotguns and a stun gun.

Police also found two GPS tracking devices and equipment to attach them to a vehicle, one of which at some point had been attached to his ex’s Honda.

Homme had also apparently written out his plan to “blitz, gag, handcuff” and “box her in trunk,” as well as what appeared to be a chilling script of things he intended to use while holding her in captivity:

Law enforcement used a search warrant for Homme’s cell phone to confirm he was around his ex-wife’s home around the same time as the break-in, which was enough evidence to get the additional warrant for his home.

Homme is still listed on his Facebook page as Head Instructor at Academy Eau Claire, though his profile has since been removed from the academy web page. A lightweight, his professional MMA fight record stood at 8-1-0. Homme trained jiu-jitsu under Greg Nelson.

He is charged with first-degree burglary and attempted kidnapping, with bail set at $1,000,000.