Jon Calestine came, saw, and conquered, and he did it with only a few days notice.

Calestine filled in for fellow Renzo Gracie teammate Eddie Cummings at EBI 15: The Featherweights. Competitors spend months training for this event, but even though Calestine was competing on days notice, he still went in there and destroyed everyone.

After submitting all of his opponents, Jon Calestine took on former Featherweight Champion Geo “Freakazoid” Martinez in the finals.

Calestine sat and looked like he was inviting Geo into a Z-guard. Both fighters went inverted and Jon grabbed Geo’s foot, looking for a heel hook. Geo jumped looking for a guillotine, but Calestine grabbed the arm and almost got an armbar. Martinez escaped, though.

At the three minute mark, Geo was in Z-guard and began fishing for a leg. Calestine went for a leg but couldn’t hold anything. Jon looked like he wanted to pass, then sat back.

Martinez went inverted, the two rolled, and Geo went for a toehold, but nothing. Calestine then tried to pull Geo’s leg in, but couldn’t get anything.

Again, Martinez went inverted and looked for a leg, but it was Jon who went for the toehold. Geo pushed himself out, though.

With a minute left, Martinez went for a Kimura but couldn’t get anything. Regulation ended with what looked like a roughly even match.

Overtime would be different, though.

Geo Martinez opened up with some spiderwebs, but Calestine kicked his way out quickly.

Jon then went for the back, obviously wanting to hurt the ribs of Martinez, who was still hurting from his last match. Calestine locked in an RNC, but Geo defended and went for a turtle before spinning out.

Geo opted for the back at the top of the second overtime. He locked in a body triangle and Calestine rolled through to the end of the mat, causing Martinez to lose his hold.

Calestine took the back again, putting in another body triangle. Martinez tried to unhook his opponent’s feet, not feeling much of a need to defend his neck. But as Jon tightened his RNC, Geo had no choice but to defend.

Jon Calestine couldn’t get the tap, but he knew he had a significant time advantage. All he had to do was avoid getting submitted.

And that is precisely what he did. Though Geo came within inches of getting an armbar, Calestine struggled through, knowing he was the new EBI Featherweight Champion. 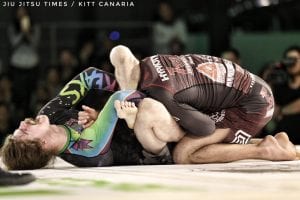 All wasn’t lost for team 10th Planet Freaks, though.

Eddy didn’t use much in the way of striking — besides playing a bongo tune on Honestein’s head — but he did utilize his rubber guard to control the champion during regulation. Then, during a second round overtime, he successfully isolated Honstein’s arm and got the tap with an armbar.

Eddy was rewarded with two new belts when he won: his Combat Jiu Jitsu belt and his new black belt.