Is Fight To Win Pro letting a convicted dog fighter fight at its next event?

According to a post from someone with the name clevobjj:

I was excited to see F2W coming to my area until I saw the card. Dan Swift mostly known for sh*t talking Chris Weidman a couple of years ago is fighting on the Cleveland card. This POS was convicted of dog fighting and we should not support him in our community. I’m disappointed that F2W would have him on their card and I will no longer be supporting them as a result.

Based on what we have seen, clevobjj is right. Dan Swift was put in prison for 10 months last year for dog fighting, and someone with the name “Dan Swift” will be on the card at FTW 69. 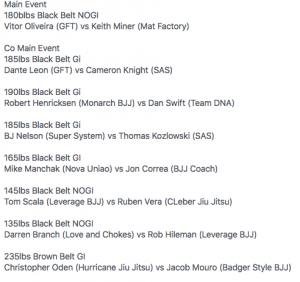 Hopefully, the promoters made a mistake, perhaps because they were unaware of his past.

The Jiu-Jitsu Times has reached out to Fight To Win Pro owner Seth Daniels in order for him to comment on the situation. We will post his reply when we get it.

California Has Banned Combat Sports Events Until The End Of May

Khabib Nurmagomedov Vs. Tony Ferguson Likely Off Due To Travel Restrictions

Jon Jones Arrested For Negligent Discharge of a Firearm and DUI

Dana White Says Nurmagomedov vs. Ferguson Still On For UFC 249, Will Have New Location

Rhalan Gracie Has Signed With Bellator, First Fight Scheduled For May