You’ll hear the idea of having a warrior mindset tossed around here and there in martial arts. But what is it? How does a person know if they’ve achieved this warrior mentality? And why does it seem like so many people surround the idea in so much mysticism?

Let’s define it first. I suppose to me, the simplest way to describe the warrior mindset would be this: You know you could lose, even die in your fight, but you don’t care; you believe that you won’t fail.

So does a person with a warrior mindset never fail? Of course they fail. How failure is handled is what separates the warriors from the wannabes. I actually believe Chael Sonnen says it well. He gave a speech to his team on TUF that has stuck with lots of people. It sticks because there is truth to his words. 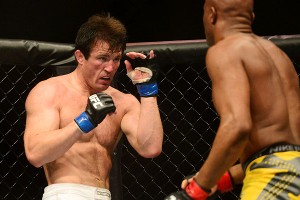 “When doubt seeps in you got two roads you can take either road. You can go to the left or you can go to the right and believe me, they’ll tell you failure is not an option. That is ridiculous. Failure is always an option. Failure is the most readily available option at all times, but it’s a choice. You can choose to fail or you can choose to succeed. And if we can plant seeds and let him know, ‘Move your feet, keep your hands up, stay off the bottom.’ That is the road to victory, or self-doubt and negative talk, and that is the road to failure. But failure is always there, and it’s okay to recognize that. If I can leave you with anything today, in my long journey through this is, one, it’s okay. Two, it’s normal. And as athletes and especially as men, as male athletes we hate to admit weakness to ourselves, and when you’re dealing with something and you got some kind of a hiccup, yeah, first thing is acknowledge it.”

It’s overcoming the failures we’ve faced that makes us warriors. It’s learning from mistakes that makes puts us in the right mindset. It’s the idea of not giving up, and accepting changes we may need to make.

Since BJJ worlds was this past weekend, there has been a video of Tammi Musumeci floating through the social media channels. In a fight with Michelle Nicolini, her arm was dislocated (see the video HERE). She was winning the fight and received a stalling call against her. She moved in order to avoid further penalties. That’s when she got caught. She didn’t tap. Clearly, she could have tapped, and no one would have thought anything of it.

However, she wanted to win. Her mind was clear, her focus was set. She knew what she had to do to win. She ended up losing on points at the end, but no one could ever question her heart. Whether or not you agree with her not tapping out, you cannot claim that she does not have a warrior’s mindset.

She isn’t the only person to not tap when it would have been the easy way out. Jon Jones, Renzo Gracie, and Jacare Souza all jump to mind. As far as their sport is concerned, they are greatness embodied (don’t worry, that doesn’t mean that you have to be their fan). They sacrificed their bodies momentarily to gain glory for their lives that will likely carry on after they have passed.

Tammi Musumeci stated on her Facebook account just today: “I honestly felt no pain and just stayed focused on my goal. I don’t suggest anyone do this. I will never again for sure, but sometimes we make mistakes that turn out to be learning experiences when looking back!” So don’t feel like you have to endure injury in order to attain greatness. But understand that it is a possibility to face down and prepare for.

So to recap, let’s look at a few definitions we’ve laid out regarding a warrior’s mindset.

Greatness is inside of you. Face the fear of failure. Become a warrior.

If you feel like any other aspect of the warrior’s mindset has been overlooked, let us know in the comments below!