How old were you when you started BJJ?

It was in January of 1997. I would have been 29 years old. That’s my unofficial start. A fellow computer programmer came to work with a black eye. This was in Texas. Programmers usually don’t get black eyes. When I asked him how he got it he said he started training REALITY COMBAT!!! I really wanted to try Reality Combat because it sounded so cool. Knowing what I know now I can tell you that it was a mix of Muay Thai, Kali and Brazilian Jiu-Jitsu. But back then I didn’t know anything. I only liked Saturdays because those were the days when we got to roughhouse. That was the only thing I could compare grappling to. It felt like when one of my sisters or one of my childhood friends would aggravate me so that I would sit on them until they said uncle. I loved roughhouse days but I had to attend the other days so I could go on Saturdays. Finally I saw UFC 1. I was like THAT! THAT is what I do. I want to learn THAT!

My official start was in 1998 when I moved to Los Angeles and started training with the Machados.

What was your inspiration to become a BJJ Black belt?

Do you have a BJJ role model?

Yes I like aspects of a lot of people. Luka is the strongest woman I had ever met. She showed me how strong women can be. Leka has the heart of a lion. She showed me how a warrior trains. My coach Tinguinha is a leader. He leads quietly with sincerity. Marcelo Garcia’s game is wicked. Have you noticed how many super intelligent people he’s attracted to him? On Tuesday I tried to channel Mackenzie Dern while I had a brown belt in a toe hold. Attack attack attack. 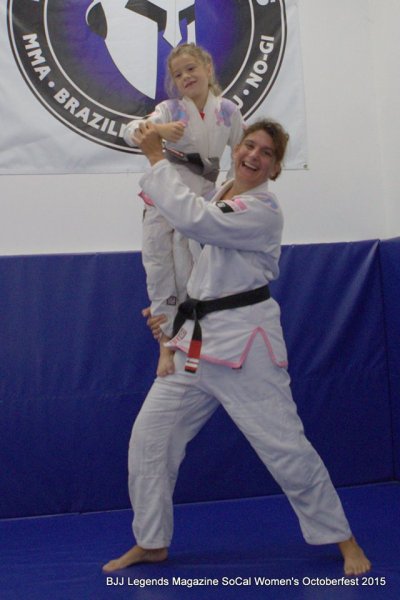 Do you have a favorite submission?

But of course! It’s an armbar from side control/back. I’ll shoot a video for you. I get this armbar more than anything else.

What is your best move?

I’ve been working two moves. One is a position called reset the back. (Gustavo Dantas) I love it because it requires zero effort and most people will give it to you. The second doesn’t have a name that I know of. It’s a particular side-control where we are both laying on our backs but I have my knee into your hip and controlling your foot. Sounds weird but again works and not much effort. I’m having trouble converting this easy control into submissions. I’ve been working it to see where it will lead. (Please send suggestions)

Thank you Valencia! I’d also like to thank your parents for being longtime supporters and my husband and kids for being wonderfully supportive when I spend an entire Saturday at a tournament or drag them to another long hot belt ceremony.

Interview conducted by Valencia Bidwell, age 9.  Valencia is fulltime Jiu-Jitsu student and founder of The Gi Project.  Valencia collects new and used BJJ gi’s / kimonos and ships them to programs in need.  Check out her website at:  www.TheGiProject.com   She also performs interviews and creates instructional videos for BJJForKids

Jiu-Jitsu, We Will Return – A Motivational Short Film

Jocko Willink Answers: Do You Think You Would Take Up Jiu-Jitsu In Your Forties?

Gracie Jiu-Jitsu St. George Forced To Close After Too Many Students Drop Payments