Roger Gracie Officially A Member Of The EVOLVE Fight Team

The EBI 7 Card Run Down

Renzo Gracie: GSP is going to fight again for sure

The Toughest Street in Phuket, Thailand

Jiu-Jitsu Maps on the Road: Beachfront BJJ in Phuket, Thailand

The Racetrack To The Cage 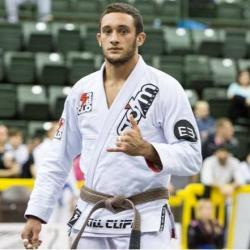 Gabriel Arges
Black Belt
Mitsuyo Maeda - Carlos Gracie Sr. - Carlos Gracie Jr.- Vinicius Magalhaes - Romulo Claudio Barral - Gabriel Arges
Brazil native Gabriel Arges is perhaps best known as a jiu jitsu black belt, under Romulo Barral and Felipe "Preguiça", competing on behalf of the Gracie Barra Academy. But he was once just a kid who loved soccer.
Arges first gained notoriety in the sport during his lower belt divisions---specifically throughout the 2013-2015 purple and brown belt campaigns. In the span of only two years, Arges gained impressive titles, including the European Open Champion, IBJJF World Champion, and even the Pan America and American National Champion.
With these accolades, it is easy to forget that Arges is still very young. He was born on the January 29th, 1993 in Belo Horizonte, the state of Minas Gerais, in central Brazil.
As a child Arges always had a fierce competitive streak, which led him to a try his hand at a multitude of different sports. In fact, his first martial arts experience occurred when he was just 14 via Thai boxing. While he enjoyed it, boxing was a fleeting interest, as Arges chose to dedicate more time to his school's soccer team, in which he was named captain.
Arges was soon introduced to jiu jitsu via a group of friends who often trained. It started out innocently enough: Arges' friends began inviting him attend their tournaments. This was quickly followed by open invites to mat sessions at one another's homes. At 16, Gabriel eventually joined a gym not far from his home.
Arges' first instructor, Fernando Fialho, also frequented the same gym, and was just embarking on his teaching career. Fialho had plenty of time to spend with his new students, and set his sights on training Arges. After just 18 months of rigorous training, Arges earned his blue belt. This sparked a fire in him, as he soon decided he wanted to compete more frequently. Unfortunately, at that time Fialho's gym had only a few blue belts with which to spar and Fialho didn't want to hold him back. With his coach's blessing, Arges decided to split his training between Fialho and the GB-BH headquarters' classes, which were managed by Marcelo "Uirapuru" Azevedo.
It was here Gabriel Arges got close with Felipe "Preguiça" Pena, who was a purple belt at the time. Pena made sure to challenge Arges, and with senior coach Uirapuru's assistance, he soon became a force to be reckoned with.  In 2012 Prena elected to return to Romulo Barral's academy, where he had been previously. Naturally, Pena invited Arges, which was the start of another important student-coach partnership with Barral, as this would eventually lead Arges to become a professional jiu jitsu athlete.
Terms of Use | Privacy Policy | Disclaimers
©2020 JiuJitsuTimes.com