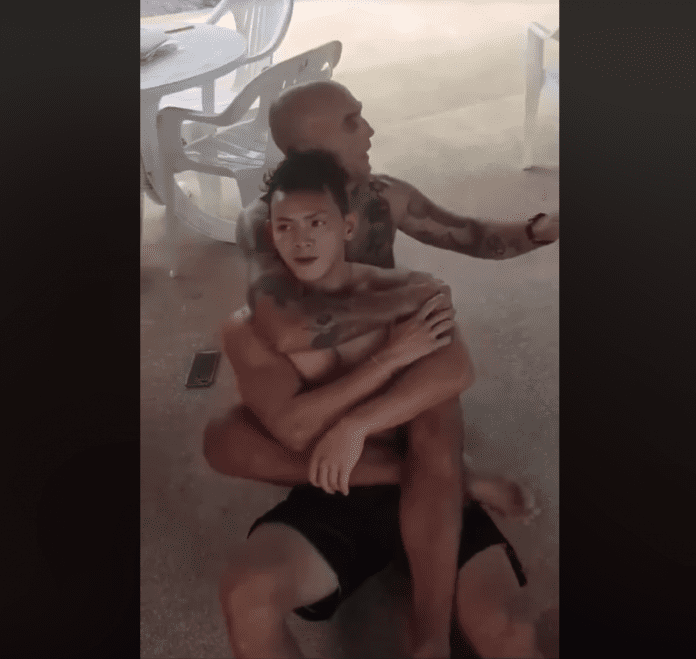 The problem with stealing out of gym lockers, period, is the heightened probability you’re stealing from someone with the ability to deliver their own justice. So stealing out of lockers at a jiu-jitsu gym? Anyone good at math wanna run the numbers on that life choice for us?

(Some men just want to watch the world burn, obviously.)

There’s not a lot of confirmable details available just yet, but video began making the rounds today of a shirtless man who had either the balls, or the brain damage, to start lifting money out of gym lockers. (Commenters claim that this happened at a fight gym, but we’ve not gotten definitely proof of that yet.) Unaware that he was being caught on tape doing it, the thief soon found himself in the loving arms of the gym’s proprietor who handled the theft by calmly, almost lovingly, rear naked choking the offender and keeping him on the ground while police come to collect their newest suspect.

The video itself isn’t exactly thrilling–it begins after the confrontation and choke application have already begun, and is only a minute long, so you’re not tuning in for some John Wick style revenge. What piqued the interest of viewers was how calm and in control the citizen’s arrest was overall: A grown man in control of his emotions and the body of a neighbor who has wronged him, placidly dominating a criminal during what could have potentially been a volatile scenario.

“He’s been stealing all our money from the changing room,” the videographer explains to a passerby wondering why there’s a choking going down casually by the pool.

“Bad people: Don’t come here to my house,” announces the jiujitero to onlookers in response. “This is an example for everyone–you good? Don’t worry.” That last part is directed at the thief, before he gently reapplies the choke and continues to wait for cops.

For a moment the suspect appears to get all hot and bothered again by something someone off camera says, causing his captor to tighten his position, pat him on the chest, and offer a few more benevolent words.

“You go no where. We wait for the police, like old buddies!” Then he smiles into the camera with the satisfaction of a man who’s done his job for the day.

If anyone knows who these two are, shoot us a message please: