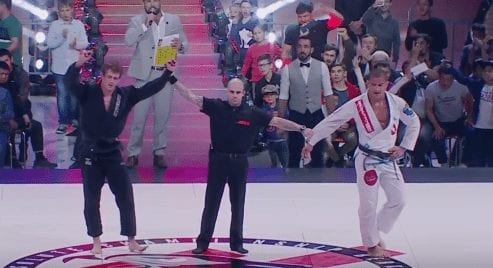 Cornelius pulled guard in the first round and didn’t allow Aly to pass as he tried to work for lapel control. The round ended with neither competitor earning any points.

The second round saw multiple takedown attempts from both competitors. However, neither athlete could keep the other down long enough to score points. The round ended with Cornelius pulling guard and no points on the scoreboard.

Early in the third round, a takedown attempt by Aly turned into a triangle attempt by Cornelius, which transitioned into an omoplata and then a footlock attempt. Cornelius swept Aly to gain two points, but then Aly pulled a reversal to tie the score. Cornelius was unable to sweep his opponent, but made an impressive effort to do so mere seconds before the clock ran out.

In the end, the judges awarded the win to Cornelius by split decision.