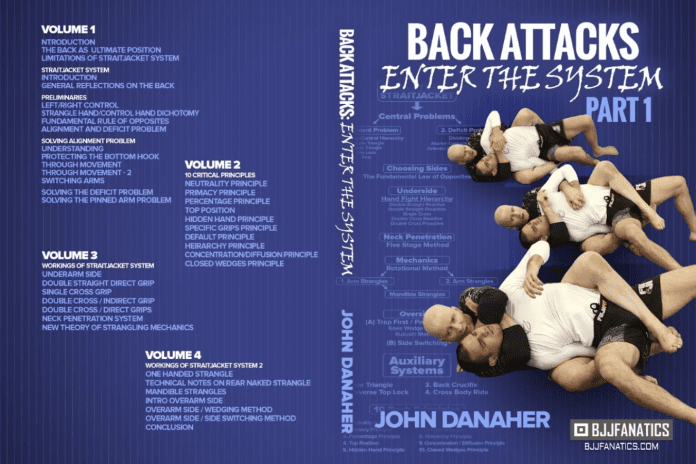 Understanding the breakout success of the Danaher Death Squad requires delving deep into the psyche of the architect. The blue basement of Renzo Gracie’s in downtown Manhattan has become a breeding ground of some of the finest grapplers on the scene today. ADCC champion and recent IBJJF No-Gi Worlds double gold medalist Gordon Ryan has been a continual advocate for the Danaher back attack system, having this to say in a recent Instagram post about the program:

“I remember when John first came out with his DVD everyone freaked out that it was $200. Look at [it] this way. Let’s say John charges $200 an hour for a private. Well, now you have 10 hours of a complete system that you can watch anywhere and has more content per minute than anyone else. If anything it’s a bargain. He could have sold [them] for $2000 apiece.”

In watching and practicing the principles over the last few months, I have incorporated them organically into my game and have seen significant results in sparring. Below are ten central principles from the Danaher Back System DVD, representing but a small portion of the value of the set underlining the conceptual template through which Danaher teaches.

Neutrality Principle
Anyone familiar with Gracie Combatives understands the advocacy for falling to the “strong side” to finish a rear-naked choke. Inlay terms, when applying an over-under seat belt grip while on your opponent’s back, falling towards the side with the arm over the shoulder is conventionally thought of as ideal. With regards to the rear-naked choke, Danaher proposes that either side executed properly works equally effectively at applying a strangle. Strong-side chokes have the advantage of having the choking elbow facing the ground, thus having a gravitational advantage. Danaher proposes that on the weak side, hiding the choking arm behind the opponent’s back while securing it in place with your head can work just as effectively.

Primacy Principle
Anyone familiar with Danaher’s leg lock system understands his insistence that the heel hook is the most effective submission in the ashi garami system. Ankle locks may conversely have a degree of pain tolerance that allows resilient opponents to survive the submission. Similarly, the rear-naked choke is seen as the most effective submission of the back attack system, garnering superiority over any form of joint lock in terms of its overall effectiveness. Helio Gracie is famous for the quote, “When it comes to chokes, there are no tough guys. Everybody goes to sleep.” This thinking serves as the central philosophical component behind the system: attack the neck as the number-one option.

USE COUPON CODE Back Attacks Enter The System By John Danaher: JJT

Percentage Principle
As the most effective submission of the back attack system, the rear-naked choke thus should exist at the top of the ladder in any and every offensive arsenal. However, don’t discount the value of the auxiliary systems within the world of back attacks, examples including the reverse triangle, twister, or armbar setups. The rear-naked choke should be the primary attack in mind to put pressure on the opponent to yield. Only after every choke attack has been shut down is it recommended that you move on to other submissions. Given an opportunity to attack a choke versus any other attack, the priority must always be given to the highest percentage finish. No human is immune to cutting off blood flow to the brain. The rear strangle is the crux that ties the entire system together.

Top Position Principle
Attacking a rear strangle will invariably not come without its obstacles, the primary of which will be an incessant hand fight to gain a favorable position. An instructor of mine once made a brilliant analogy of how our hands must fight the opponent’s hands like water spilling down a waterfall, even going so far as incorporating our legs to trap one of his arms if the opportunity presents itself. Should an opponent have a grip on one of your hands, it’s not difficult to simply pull your hand backward to break the grip and reestablish top position. The idea is to take away as many lines of defense of his as possible. Trapping an arm with a leg effectively takes one important one away, leaving you two arms to attack one defensive arm of his as well as his neck.

Hidden Hand Principle
If the position of your hands is obvious, your opponent can mount frustrating defenses while working to clear off your hooks. The point on your hands that your opponent ultimately wants to control is the base of the thumb, as this serves as the focal point for the entry of the choking hand. Don’t reveal your hand in going for the choke, otherwise, your opponent can control your entire arm. Remain coy in working your thumb under their chin line and gradually inch your way into forming a tightly closed circle around their neck. The same principle applies for the support arm — it’s imperative that this doesn’t enter the periphery of your opponent until you’re locking up the choke.

Specific Grips Principle
It is important that you be precise with the application of your neutralizing grips. Should your left arm be controlling your opponent’s left arm or your right arm controlling their right, the grip would ideally be over their knuckle line. If your left arm is controlling their right or vice versa, you are wise to grip over the area where the veins are distending on their distal forearm. Tying up both arms in this manner yields what is known as the “straight jacket” position: a positional configuration that is considerably difficult to deal with.

Default Principle
As a general rule in jiu-jitsu, you ought to develop a sixth sense of detecting when your opponent is giving daylight under their neck. Marcelo Garcia wrote in one of his books that throughout any scramble in every roll, he makes a point to always pay attention to the location and availability of his opponent’s throat. When on your opponent’s back, your opponent only needs to expose space equal to the width of your wrist under their chin for there to be an available choke. You must become aware of the opportunities that present themselves and be proactive in taking advantage of said spaces. Danaher emphasizes this as one of the most important principles of attacking the back.

Hierarchy Principle
Building off of the top position principle, there is a hierarchy of control you ought to be aware of when controlling your opponent’s defending hands. It’s always ideal to have your hands on top of your opponent’s hands rather than underneath them. Should they achieve a grip on you, you can simply pull your arm away to break their connection and reestablish top position. It’s to your advantage to control their opposite sidearm with yours rather than the same-side arm, but it’s still more beneficial to be on top if you’re controlling same-side arms rather than on the bottom. Note that in advancing towards greater control and eventually a submission, it’ll be significantly easier to achieve a stranglehold should you have double cross-grip control.

Concentration/Diffusion Principle
This principle serves to underline the paradigm of concentrating all your attack effort towards their neck, a relatively small area of their body, combined with diffusing your intentions with auxiliary systems that attack different parts of their body. Tying in a sound armbar game, reverse triangles, twisters, leg locks, kimuras, and other attacks is critical in the long-term development of your strangling abilities. While the rear-naked choke is the king of all submissions, it works best when applied in tandem with other submission possibilities to keep your opponent guessing.

There are many more principles and concepts that Danaher delves into in his Back Attacks: Enter The System DVD. I see this as a formative DVD for any serious jiu-jitsu practitioner that is looking to take their back attacks to the next level, and I can’t recommend it enough. The DVD is currently available on BJJ Fanatics.

GET 15% OFF USE DISCOUNT CODE: JJT

Note: The product referenced in this article was provided to the Jiu-Jitsu Times in exchange for an honest review.

Review: Learn Jeff Glover’s Secrets to Escapes In ‘Get Off Me Fool’