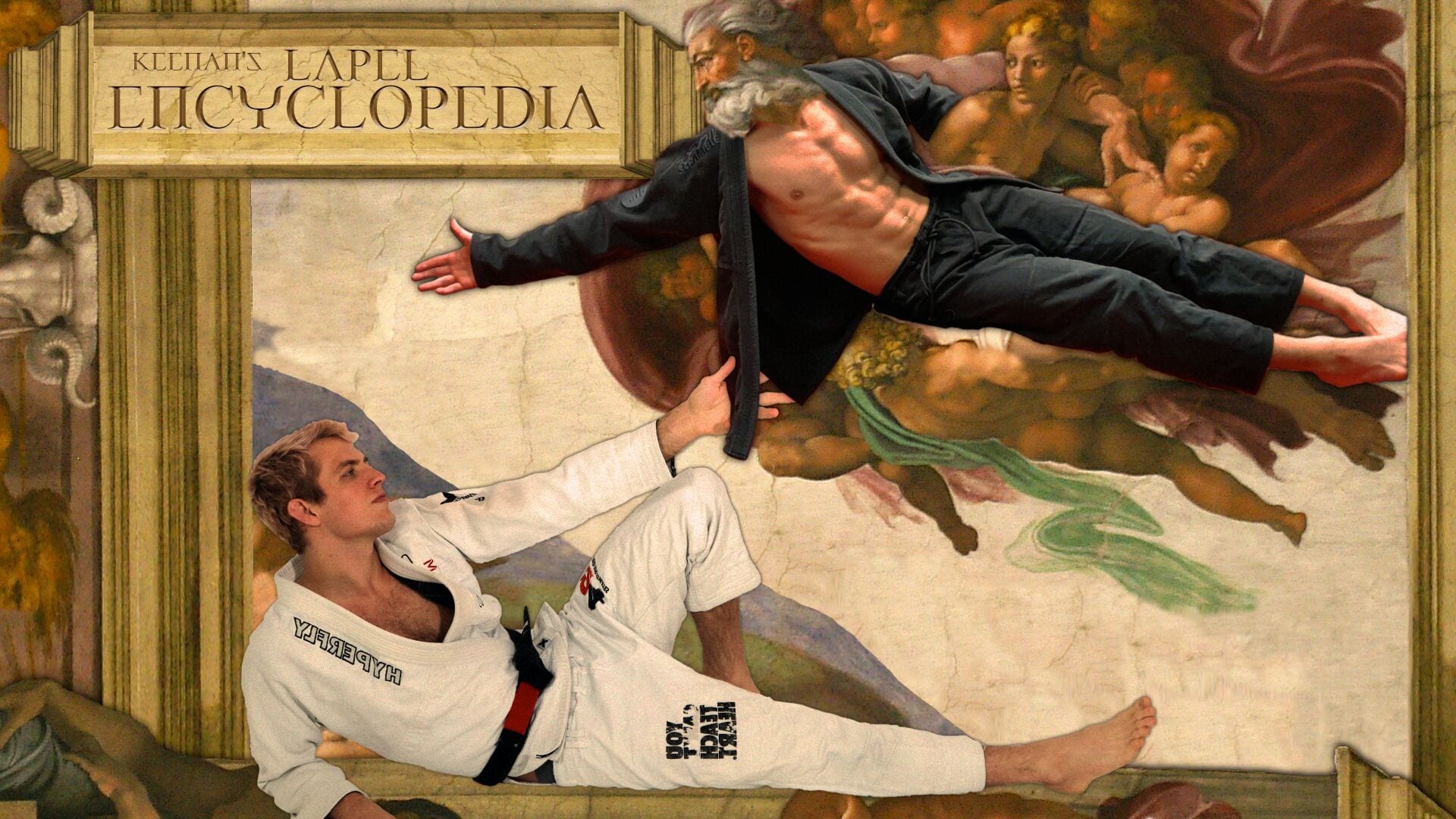 The great artist Michelangelo is arguably best known as the painter and architect of the Sistine Chapel, one of the Vatican’s most prized remnants from the 16th century. Fast-forward 500 years, one need look no further than young 27-year-old Keenan Cornelius, a Hawaii-native by way of Hilo, undertaking the arduous task of replicating the Italian master’s work using the gi as his canvas.

The Lapel Guard Encyclopedia is entirely a Keenan-tested creation, a way to deal with bigger stronger opponents using the fabric as a weapon, a system that has proven time and again to land him victories against some of the elite in competition jiu-jitsu today. Along the course of his journey Keenan has gathered details; tinkering, analyzing, testing, refining, and ultimately improving upon them in a way that draws upon the reinforcement of sound positioning through precise variations of lapel control.

At a recent Sunday open mat at his new San Diego-based gym Legion American Jiu-Jitsu, Keenan reflects on how his fascination and innovative developments with the lapel control came about.

“Something I started doing just naturally, I never thought about it, like I was the one to come up with new stuff but it just kind of became that way because I was training with a lot of really tough really strong dudes and a lot of conventional jiu-jitsu just wasn’t working for me against these massively powerful humans that are way more athletic than me. It was of just a product of necessity just to figure out how to control a stronger human. It’s just built into my core really, ever since I was a blue belt.”

This is not a beginner DVD, yet it has many basic concepts referenced throughout. This is not a system to begin obsessing over and employing as anything less than an advanced blue belt, as it can lead to poorly formed habits and overreliance on the gi as a method of open guard control. It could also lead to massive success on the lower belt circuit, as he explains.

“It’s very powerful, especially in the lower belts. Seeing blue belts and purple belts with it it’s almost unfair. I think that’s why people get frustrated because they don’t even know normal jiu-jitsu yet, how are they supposed to deal with something they’ve never seen that doesn’t really operate under the same rules as normal jiu-jitsu?”

He explains his view on beginners with regard to applying many of the gi concepts.

“I think it could be applicable to lower belts. There are some fundamental things about the lapel I think that people should know. A lapel grip should be taught in the same way that people are taught a sleeve grip because it’s a very powerful form of control, but it’s the only grip that doesn’t stand alone as a form of control. You can’t just grab someone’s lapel and do stuff with it. You have to reinforce it with another series of positions so it’s sort of under a different realm. That’s why I think it’s so interesting because you have this limp thing that depending on its orientation between your bodies, it gains power and leverage in different ways. It’s the most versatile grip of them all.”

Keenan further discussed that some of his recent uses of lapel concepts apply to the Lucas Leite guard, a dogfight half-guard position universally referenced throughout the jiu-jitsu landscape. Many of these concepts are only hinted at in the DVD but have yet to be included, as further development and application will eventually see it get added to the already solid 10 hours of content. The app stands out not only in its breadth of content but in the user-friendly application as well. Keenan’s app so far appears to be glitch-free, though it has taken some time.

“Whenever you’re working with developers for apps or websites it’s pretty hard to get really solid deliverables of what they’re going to get you. It took us a few iterations to find someone that did a good job with it. The person who made that app — it was good specifically for an instructional, but not as good for the Keenan Online membership site, which is why we don’t have an app for that. For the functionality we need, we need something a little bit different than what that guy was capable of, but it’s perfect for an instructional that we need to update regularly.”

Many BJJ instructionals are based on streaming websites off an internet browser, with mixed performance and several clicks before reaching the desired content, he discusses.
“I think it’s super important to have a mobile version because obviously mobile browsers are not very good. The mobile version for the actual internet browser on a phone sucks on pretty much every website. You kind of have to make an app for the mobile situation but it was difficult.”

As a committed member of his new gym, students have the added advantage of having full access to the content in addition to the privilege of getting to train under him on a nightly basis. Keenan is doing his part to make sure that there is synchrony amongst his students.

Being that he is from Hawaii Keenan truly understands the meaning of Ohana. Ohana, to draw a Lilo and Stitch reference, meaning family, affirms that nobody gets left behind.

“People who commit to a monthly or yearly thing, they get access to all the apps. We have the functionality to put all the classes up. We’re going to have a separate section where people can see by date what was taught in the class, so if they want to catch up or review because they missed it and they want to see what we were working on, no one is going to really be left in the dark. There should be somewhat of an understandable digestible curriculum throughout the months and weeks that we do that.”

Contrary to what one might think and though it may be obvious to some, signing up at Legion will net you far more than just lapel techniques.

“I don’t want to spend too much time only teaching lapel guard in the gym. I feel like it’s mostly my job to teach people how to move their bodies properly and just learn basic coordination, figure out how to do jiu-jitsu. I feel like lapel guard is too strong in a lot of instances for them to do both. I want them to have access to the lapel encyclopedia so that they can practice it on their own and if they have questions for me about it, we can go over it.”

He expands upon how he envisions running his curriculum on a day-to-day and week-to-week basis.

“We do cover lapel stuff in class but we do kind of a rotating thing where we do something like standing, passing, guard throughout the weeks. We’ll spend a whole week on standup, with maybe a little bit of guard and passing mixed in, and then the next week will be like all guard with a little bit of standing and passing mixed in. Then the third week would be all passing with a little bit of standing and guard mixed in. I just don’t want it to take over the class with just only lapel guard players. I want to have a versatile group of people, people who are [for example] takedown-passers who don’t even like touching the lapel. I want to have it all and make sure I show everything. I’m just trying to have as much information as possible available to the students.”

The full spectrum of Keenan’s guard is intermixed with the gi in a way where classically named positions such as the tornado guard or omoplata become the wormnado guard and the wormoplata, to draw a couple of examples. In terms of the nuts and bolts of the DVD, he goes at length discussing the worm guard, the squid guard, reverse de la worm guard, gubber guard, ringworm guard, belt guard, among others, linking them all to a seamless vortex of gi hand-offs, hip misdirection, and points of contact. The system is created with seamless transitions in mind. Squid Guard as he explains in the DVD is merely a lapel lasso when the hand-off to the strong-side worm guard set up is hindered. Rather than play worm guard on his weak side, Keenan simply developed a new variation. He also suggests the belt grip as an underrated option for controlling the opponent’s hips if the lapels are not available, referencing Lucas Barbosa as one training partner of his that actually prefers it over the standard lapel control.

Though the names sound intimidating at first, they are merely meant as checkpoints in his system each indicating a new web of techniques available through its respective channel. A simple hand-off of the lapel under the leg will be named one position, whereas handing that grip off to the opposite hand may have another. This is all broken down in a sequential manner by Keenan, as he introduces the concepts in the earlier chapters only to expand upon them in later chapters, making it relatively easy to follow along. He includes lapel techniques that have been shared to him over the years by various sources, only to find their way into his everyday system. As an added bonus he devotes a chapter specifically on passing the worm guard as well as a part of the app devoted to bloopers in his film-making. His personality shines through on this DVD, as many of his explanations take on a candid, yet clear and concise nature to them. Even his technique names often take on a light-hearted nature to them, a tricky sweep from worm guard that Keenan teaches in his app is affectionately only listed as ‘Fancy Spinning Shit.’ At the beginning of the video, Keenan explicitly mentions “this is for all those purple belts doing it for the ‘gram.”

Watching chronologically, one will find that their lapel knowledge from this DVD will exponentially increase in a stunningly short amount of time.

The prerequisite knowledge needed to fully grasp the value of this DVD stands as an intermediate to advanced-intermediate level of jiu-jitsu, as he does not hold back in expounding upon the clearly outlined and organized mind-map he creates for the viewer through his refreshingly user-friendly app.

Keenan talks about how this can be the missing piece of the puzzle with regards to overcoming faster, stronger opponents in the gi.

“The lapel guard stuff, once it’s fully locked in, it’s sort of like a solved guard, like there’s not much you can do. Which is something people talk about in game theory, there are certain games that are ‘solved’. Technically if you know the right steps you can win 100% of the time. Obviously jiu-jitsu isn’t like that, but there are places where you can gain a massive advantage and have a super high success rate purely off knowledge.”

If you too would like to have the secrets of the ‘solved’ guard, check out Keenan’s website here.