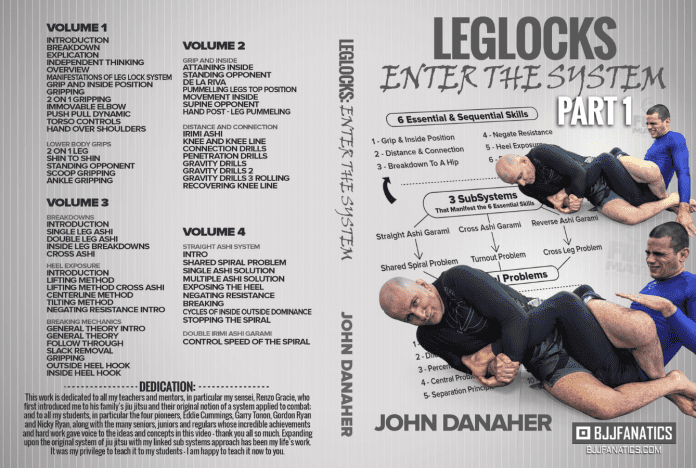 The path towards jiu-jitsu development isn’t rocket science. Attend class, listen to the instructors, buy into the culture, and be a safe, technical training partner. Why is it then that we see an unusually high output of competition success from Renzo Gracie’s in New York? What exactly is it about the teaching methodology of John Danaher that is consistently taking raw talent and crafting it into champion-level jiu-jitsu?

In Leglocks: Enter the System, Danaher breaks down entries, controls, and finishes of his coveted lower body attacks. It begins by looking at leg locks not as individual submissions, but as a systematic sequence of controls laid out to inevitably force the opponent to succumb and make a mistake.

GET BIG DISCOUNT ON JOHN DANAHER DVD BY USING THIS CODE: JJT

I have talked to more than a few jiu-jitsu practitioners that have scoffed at the price point of $200. After viewing it myself and giving myself about a month of experimentation, I can attest that the value of the information within the DVD far exceeds the price tag when considering the estimated level of improvement gained from a tournament, seminar, or private lesson.

Danaher focuses on the understanding of ten core principles as well as the development of six essential skills that are meant to acquire favorable leg entanglement. While the skills require repetition and drilling to refine, the prioritization and execution of these principles can be almost immediately understood and recognized.

1. Double trouble principle – This is the idea that the overwhelming majority of resistance in attacking leg locks will come from the second leg. It would thus be wise to develop skills geared at controlling the second leg while we attack leg locks.

2. Dilemma principle – We would rather create dilemmas for the opponent than singular problems. They must choose between one problem to deal with over another, creating a dilemma. We can have three, four, or more problems that we throw at the opponent in an effort to create an endless cycle of dilemmas, ultimately culminating in our opponent falling into a submission finish.

3. Percentage principle – There are several leg locks. However, 90 percent of the success will come from the inside heel hook and the outside heel hook, making them our highest percentage finishes. Understanding this idea allows us to delegate our time towards investing in the most effective finishes under the duress of an intelligent opponent who knows proper defense.

4. Central Problem principle – For any situation, there’s at least one central problem that motivates the action of both athletes. Understanding and identifying what the central problem in a given scenario is can give us direction in addressing the most pressing matter standing in the way of a submission.

5. Separation principle – There’s a strong distinction between the mechanism of controlling an opponent versus breaking an opponent. An athlete must be wary of separating the two, therefore approaching each objective with its own primary focus. Leglocks are like any other position in jiu-jitsu in that it benefits us to focus on ‘position before submission.’

GET 15% OFF ON JOHN DANAHER DVD CODE: JJT

6. Hierarchy principle – There are various ashi garamis and leg locks that we can employ. Understanding the hierarchy and the priorities we ought to have in our approach make all the difference in terms of achieving success in the long run.

7. Opposing forces principle – This is the idea that whenever we go to control and break our opponent, we always want to create a force of breaking opposite to the force of control. The detail of our leg and grip position will invariably determine or success or failure in this regard.

8. Holistic principle – Most people teach heel hooks as an isolated move. The best way to attack leg locks begins within the framework of a long chain of events, relying on favorable inside positioning of the legs as well as dominant grip. The battle is won or lost far before the breaking of any joints occurs.

Developing a systems-based approach towards leg locking falls in line with the paradigm that Danaher has famously outlined throughout his teachings: that the most successful athletes in jiu-jitsu develop a system around their particular set of favorite moves that allows them to submit their opponent despite their opponent’s best efforts. Leg locks are not to be viewed any differently.

Throughout the DVD, I get the sense that the best way to master the principles and truly own the concepts would be to attend Danaher’s classes in person. Danaher shares many of the drills he utilizes with his students to drive home some of the more critical points of control and negating your opponent’s resistance. Since viewing the DVD, I haven’t had a chance to visit Renzo Gracie’s in New York. I have found, however, that simple knowledge of my priorities makes me far more prepared to enter the open guard of my opponents as well as engaging in any type of guard that I choose to play. I feel overwhelmingly more confident in dismantling and disengaging from leg lock attacks, particularly against opponents that aren’t aware of Danaher’s teachings. When considering the improvement I’ve made from other DVDs in the past, the lessons I learn from competing in a tournament, or the concepts I might pick up at a seminar, there’s no question that the Danaher Leg Lock DVD is a brilliant bargain with almost overnight results.

Whether you’re an active competitor or a part-time jiu-jitsu hobbyist, there are incredible benefits to be had simply by spending a few hours with Mr. Danaher as he shares the system he’s used to completely turned the jiu-jitsu world upside down. It should come as no surprise that mastery of his concepts can make dangerous grapplers out of any size, shape, or current experience level.

Leg Locks: Entering the System is currently available via BJJfanatics.com.