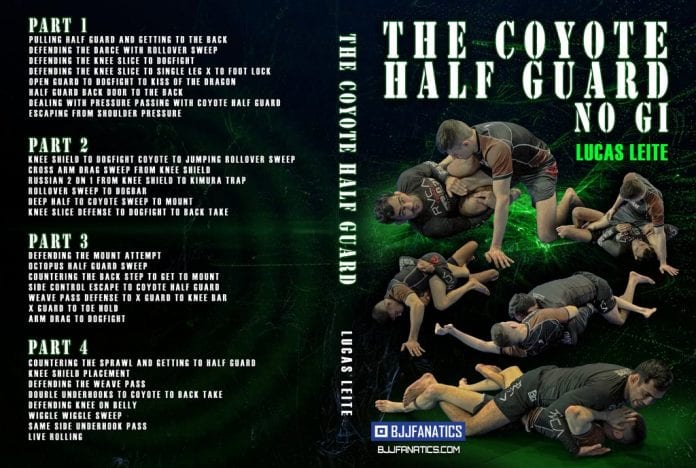 Any dedicated student of half-guard considers Lucas Leite as a household name in jiu-jitsu. With five IBJJF World Championship titles under his belt at the Adult Black Belt level, four of them in no-gi, one need look no further than YouTube to find ample evidence of his prowess feeding directly into his game known to many as ‘the Coyote.’ A standard half-guard across jiu-jitsu circles, there is nary a professor out there that teaches any sort of half-guard game that does not have at least some similar principles utilized by Lucas at the highest levels of the sport.

Just what is the Coyote? As Lucas explains in his new No-Gi Half Guard DVD released by BJJ Fanatics, the Coyote is the foundational component of the half-guard system that he employs so successfully. It is a game-changing moment inside an offensive half-guard, specifically referring to the twisting knee pressure imposed on the opponent by a half-guard player’s ankle drag with their top leg.

As Lucas explains, this type of pressure forces the opponent to expose their back, and the primary solution employed by many is to counter with a strong whizzer. Therein lies the crux of the position, the offset angle that the opponent is forced to accommodate opens up a slew of options outlined in this nearly three hour DVD set.

To begin, Lucas is no stranger to the fact that every fight starts on the feet and we need a way to get to our best position. He reviews footwork and handwork concepts that draws his opponent into his game. His half-guard pull, if done correctly, catches his opponent off-balance and it allows him to swing up to the dogfight in a moment’s notice. Pulling half-guard without getting a strong reaction from the opponent can cause stagnation in the position, a well-timed guard pull can ultimately make the sweep happen with minimal effort.

Lucas further dives deep into the critical skill of achieving an underhook and to counter common behaviors that opponent’s might throw at you. One such behavior would be the d’arce choke, Lucas is very particular about the posture of his neck as he enters a high underhook half-guard to prevent such an attack from happening. He shows a sweep off an attempt to secure a d’arce, trapping the opponent’s arm underneath his armpit as he initiates the roll with the Coyote pressure. There are many concepts from wrestling that Lucas introduces, such as the limp arm out of dogfight as well as dealing with a standing opponent in that same position. Achieving the Coyote pressure on the knee is the primary focus throughout, without it an opponent is free to maneuver their hips and impose more dynamic guard passing options.

CLICK HERE TO PURCHASE The Coyote Half Guard No Gi

A few Easter eggs that are included within the move sets are Lucas’s go-to mount, back mount, and submission transitions. The precision with which he inserts a hook off an opponent’s turtle, the momentum with which he swings up to dogfight off an opponents sprawl, as well as the mechanical pressure he creates on his armbars are indicative of one common theme throughout; Lucas hits his positions with authority. He discusses an arm drag attempt that turns into an overhead Shaolin-type sweep, a similar movement that he used against Xande Ribeiro at the 2013 World Championships.

As a competitor, Lucas leaves a legacy through his bottom game. To paraphrase Richard Pryor, the mark of true greatness in any field is when everything that came before is obsolete and everything that comes after you bears your mark. Overheard at seminars, academies, and tournaments worldwide are references to the ‘Lucas Leite’ half-guard. A true student of the game understands that by referring to that name speaks of a specific type of game, a game with it’s own depth and level of sophistication, a game that was successful in landing high profile wins against the likes of Ribeiro, Lucas Rocha, Tim Spriggs, DJ Jackson, Clark Gracie, Murilo Santana, Kron Gracie twice, among many others.

During Lucas’s career what stands out most is that much of his success came as a result of him being victorious against opponents at higher weight classes than his own. By his own admission this is due to the marginal effectiveness difference between heavier, less mobile opponents versus lighter, more mobile grapplers. Heavier opponents tend to leave their knee on the floor in their passing, enabling the Coyote position with significantly less hassle than a classic knee slice. Lucas shows an effective counter to the knee slice, scissoring his legs across the length of his opponent’s shin, exposing the heel to be dragged into the Coyote.

Confidence in a position is a key part of achieving mastery. There have to be ways to feed into your specialty if you hope to gain the upper hand. Lucas is particular about his grip in escaping side control, he employs a highly-efficient variation of an elbow escape that feeds right into his system. He is constantly in search of the underhook, the deep-half swing, the arm drag, and most importantly the ability for his opponent to punch him. He points out that even in a grappling situation without strikes, a crossface looms similar to an opponents punch, driving home the point of distance management in timing his entry playing the inside game.

Any serious student of the half-guard position with an emphasis in no-gi can not go without this DVD. There are tips on dealing with the back step from half-guard, a very common behavior given the ever-evolving leg lock landscape on the competition scene today. Lucas has contingency plans within his game to deal with these type of players. As a successful competitor and full-time coach, often running the CheckMat HQ Worlds camp under the watchful eye of Leo Vieira, spreading a game that Buchecha himself has used extensively in his dominant conquest of Absolute Weight World Titles, take it from no one better on how to play the dogfight half-guard in no-gi. Lucas’s half-guard secrets are an indispensable part of the arsenal for any bottom player.

Review: Learn Jeff Glover’s Secrets to Escapes In ‘Get Off Me Fool’