Peter Lingesso will be one of the many competitors stepping onto the big stage tonight at Fight 2 Win 128, which caps off with an explosive main event between Nick Rodriguez and Kaynan Duarte. But while he’ll be amongst plenty of athletes who are young enough to be in what most would consider their “prime,” Lingesso is at a very different stage in life. In fact, in just ten days, he’ll be turning fifty years old, and he intends to use this match against Will Weisser to say goodbye to his forties with some fireworks.

Like many BJJ practitioners, Lingesso’s interest in jiu-jitsu started when he watched UFC 1. He was in Coronado, CA, serving in the Navy and found himself rooting for “the guy in the pajamas,” and just a few months later, he gave it a try for the first time. However, he didn’t formally start training until 2001, when he signed up at what is now NJMA. His time training, though, was relatively short-lived — his job at the time caused his training schedule to suffer, and it wasn’t until seven years ago that he once again stepped onto the mats, this time with his wife and son at UFC Gym Cherry Hill.

For the past five years, Lingesso has trained at McHugh Brazilian Jiu-Jitsu, where he’s continued to climb the ladder of leadership and success. In addition to giving back as a coach, he’s also won a NAGA and medaled at Grapplers Quest and UGA. “My NY Open win as a purple belt was my biggest win until Seth [Daniels] and F2W came around,” says Lingesso. “Last July I competed at F2W 81 and won by decision. I’m 1-1 with F2W.”

All that time on the mats has, unsurprisingly, left Lingesso with a battered body. “It’s funny, I competed last July on one leg for the most part; my right knee was a wreck and it hindered me badly,” he says. “I had surgery in November and figured maybe at my age, it’s best to just stick to teaching and getting better at teaching. Then in April I got the bug again when F2W came around again.” Unable to compete in July’s event, Lingesso told Daniels that he definitely wanted to make his return in October so he could have another match before his fiftieth birthday.

While winning (and, more specifically, winning by submission) is always Lingesso’s goal when he competes, he’s competing for something bigger than himself tonight. “I want to represent my family, my academy, my Professor [Pete McHugh], and my teammates. The triangle and shark on my lapel means more than just, ‘Oh hey, look where I train.’ It’s a badge of honor that I feel I need to live up to. I want to do this for my family, my team, just everyone I’m around. I’m blessed. I’ll be 50 on October 30th, I’m in pretty good shape, I have something I love, and I want to put it on the line test myself and show how much I love the whole grind of it.”

Being successful in competitive jiu-jitsu at almost fifty years old requires you to be adaptable, and Lingesso has been adjusting his game throughout the years. “I found out early on that I’m not in the Mendes family, so berimbolos and flashy jiu-jitsu was out,” he says. “When I transitioned as a three-stripe blue belt to McHugh Jiu-Jitsu, my eyes were opened up to some unbelievable teaching and jiu-jitsu techniques by Professor, the best teacher I ever had, that expanded my game incredibly.”

Importantly, too, is that Lingesso embraces his own strengths rather than trying to transform his jiu-jitsu into something it’s not meant to be. “I never compare myself to my peers, because, well, Professor Pete, Professor John Battle, my fellow coach Tony Lascola — they have beautiful athletic jiu-jitsu, like a ballet. I always say when I teach: you get the best of what jiu-jitsu will look like with them, and then there is my jiu-jitsu, which is more of a car crash. Professor affectionately named it ‘Chair Jitsu’ because rolling with me is like falling down the stairs in a chair or getting hit with a kitchen table. I embrace it. I’m not flexible, I’m not athletic, I’m just a guy who is at the academy six to seven days a week doing my best to be the best me I can be.”

Lingesso’s ability to train and compete over the years is the result of discipline, and he recommends the same for other jiu-jitsu practitioners his age looking to stay in competitive shape. “Learn your body and what you need to do to keep it moving forward; yoga, cardio, jazzercise, whatever. Diet is so important. I mean, I’m not gonna lie, I’ll eat a Baconater and I’m not ashamed — it’s good — but it’s not the cornerstone of my diet. I try to fuel myself for my jiu-jitsu, and I don’t want that dad bod. Call me vain, I guess, but I want to be in shape,” he says.

While many BJJ athletes young, old, and in between are inspired by Lingesso’s never-quit drive and optimistic attitude, his feet remain planted firmly on the ground (unless he’s playing guard, of course). “When I first did F2W two years ago, I fought Dez Macdonald and lost. Great guy too, but about 15 years younger than me,” he recalls. “I didn’t care about that, to be honest, but when I would go coach a competition… I’d have people come up to me and say, ‘Wow, you’re an inspiration.’ I said, ‘No, I’m Pete, it’s nice to meet you.’ It’s very very humbling and I don’t know how to handle it when I hear it. To me, it’s just me doing what I love, and if I have an impact in a positive way in someone’s life and people look to me that way, I will embrace that and do my best to shoulder the responsibility. I won’t pound my chest about my success or dwell on my losses.”

When Lingesso takes to the stage tonight, he’ll have the support of his whole family (his wife Jennifer and children Karna, Julia, Carlo, and Jack, who he thanks for “understanding and being patient” with him over the course of his jiu-jitsu journey) and his team (who he also expressed his gratitude toward for “beating him up and keeping him humble and motivated”). He’ll be taking on his next big challenge while proving that age truly is just a number, pushed by the same drive that has gotten him to where he is today. “I think everyone that knows me will say I’m a ‘heart’ guy — what I don’t have in ability I make up for in heart. I wear it on my sleeve,” he says. “I don’t want to slow down, I want to keep moving and hopefully one day win at Worlds or hold the F2W AARP belt! I just love jiu-jitsu, so I say find something you love and do it! Dive in embrace the highs and lows but keep going! Never quit!”

You can watch Lingesso vs. Weiser and many other exciting matches when Fight 2 Win 128 streams live TONIGHT on FloGrappling! 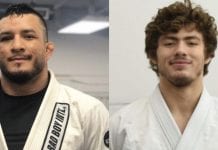 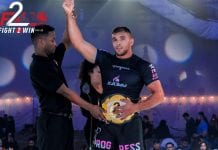 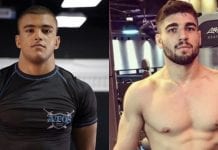 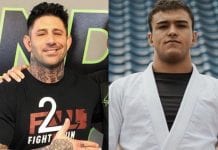 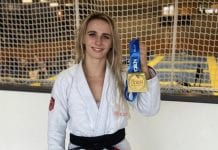 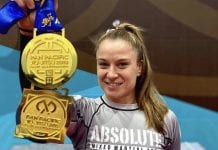 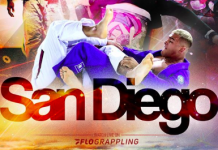 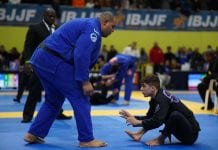 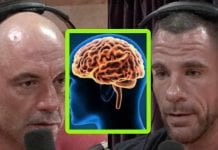 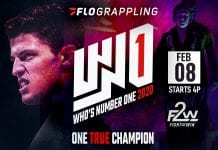 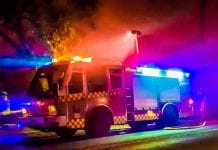 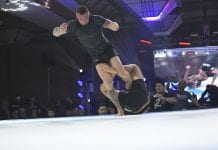