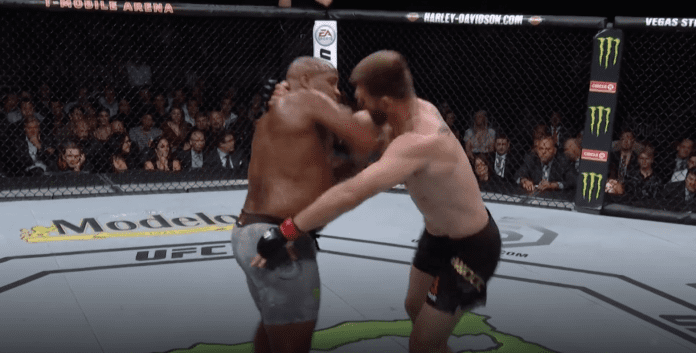 Ladies and gentlemen, history has been made.

The two started out with a touch of the gloves, and Miocic tried to close the distance. DC, however, wanted the clinch and landed a big right hand.

Stipe dragged Cormier to the ground, but DC got right back up. Miocic pressed the light heavyweight champion up against the cage and landed a knee.

The two broke up and DC landed a stiff jab, but Stipe was clearly the aggressor, hitting him with solid punches and ending with a knee to the body.

The fight was stopped briefly after Cormier poked Stipe in the eye. The light heavyweight champion was given a firm warning from the referee.

The two then threw a huge exchange and Stipe went down. Cormier swarmed, the referee had no choice but to stop the fight.

But the fighting wasn’t over yet. Shortly after the belt was wrapped around DC’s waist, former Heavyweight Champion Brock Lesnar came in the cage and pushed Cormier hard. The two had to be separated.

Joe Rogan then interviewed Lesnar, who said that he was coming for DC! Could Brock Lesnar versus Daniel Cormier be the match that takes the UFC out of its slump?