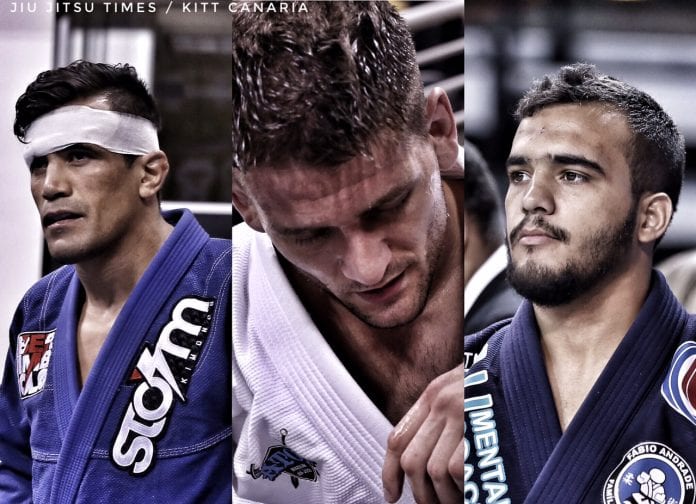 There is no telling who will win the featherweight competition at IBJJF Worlds 2017.  Marcio Andre and  Rubens “Cobrinha” Charles are two of the contestants and favored fighters, but that does not guarantee a win.

There are several professional and hungry fighters looking to shine, like Rubens Charles Maciel, Gianni Grippo, AJ Agazarm, and Osvaldo Augusto. Most of these fighters probably wish that Rafael Mendes would come back to defend his title, but Mendes has retired. This is more than welcome since the man has dedicated almost 16 years to jiu-jitsu.

This tournament is going to be quite good, though, as it is going to put these fighters against each other. Gianni Grippo, for example, is known for being one of the most promising in the ‘Berimbolo Generation.‘ He has won six world titles in the lower belt divisions, so there are a lot of eyes on him.

AJ Agazarm is also a fighter worth watching. He has numerous titles under his belt, and his skill is only growing. Agazarm is well known for not holding back, and that’s what we should expect of him at Worlds.

Marcio Andre has a number of titles under his name as well. He knows how to take a punch without giving up and knows how to bring the right intensity to a match. He is the kind of fighter that not only studies his opponent but also knows when to be ferocious.

Osvaldo Queixinho is hungry for the title and hungry for wins just like any other professional jiu-jitsu fighter. His fights are honorable and memorable.

The IBJJF Worlds 2017 is going to be an event that all jiu-jitsu fans are going to be talking about for weeks after the event, so no one should miss this.